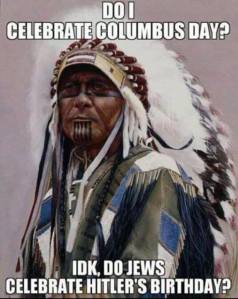 Tonight we discuss: Indigenous People’s Day, GITMO, Global Warming, Egypt, striking Rio teachers and black bloc, a major shot back in the War on Women in California,  police spying on “Moral Mondays” protests for “anarchists”, the IMF goes crazy(?), DHS buildup, Japan, and the NSA’s data center blows a gasket, and radical history. We also have a commentary and discussion on the so-called Government “shutdown” and the fake “debt ceiling” crisis and what all this political theater is really for.

A People’s History of the United States: http://www.historyisaweapon.com/defcon1/zinncol1.html

This entry was posted on October 15, 2013 by invaderzeno in The ASH.